How much should money cost?

How central banks are cutting the cost of managing money

In 1988, Australia produced the world’s first polymer banknote – a commemorative note to mark the country’s bicentennial anniversary. By 1996, the full family of Australian banknotes had switched to polymer.

So what have been the results of nearly three decades of experience of using polymer banknotes in a significant economy?

The Reserve Bank of Australia (RBA) recently released A Cost-benefit Analysis of Polymer, a detailed report which analyses – from a financial perspective – Australia’s decision to become the first country to issue a full series of polymer banknotes.

The key finding is that, over the past 25 years, the Reserve Bank of Australia has achieved net savings of close to $1 billion resulting directly from the decision to move to polymer.

Clearly, the finding will be of most interest to other central banks faced with the challenge of managing money as cost-effectively as possible. It also reflects the experience of other banks who have also already made the transition to polymer.

In its analysis of the potential cost savings the BCCR found that “The polymer denomination can stay in circulation 5 times longer and the cost savings in total were up to 74%.”

BCCR’s Director of Currency Marvin Alvarado Quesada explored the reasoning behind the bank’s move to polymer – and lessons learned along the way in a recent (Sept 2021) webinar that also touched on the role that design has to play in the successful launch of a polymer banknote. A video of the CCL Secure-sponsored Reconnaissance International webinar can be seen here.

The Reserve Bank of Vanuatu had a similar experience, following the transition to polymer. Deputy Governor Peter Tari, in a previous issue of Specimen in 2018, said: “There has been a significant drop in note-issue expenses in the past two to three years. This is greater than we initially anticipated, thanks to the durability of the substrate resulting in less unfit notes needing replacement.”

Where the savings come from

Although it generally costs more to print polymer rather than paper banknote, polymer lasts much longer. In Australia’s case, paper notes tended to wear in as little as six months. The savings come largely from a reduced need to replace worn out banknotes, as well as reduced transport, processing, and destruction costs over time.

The figures don’t include the reduced financial impacts that are a result of significantly reduced counterfeiting rates. 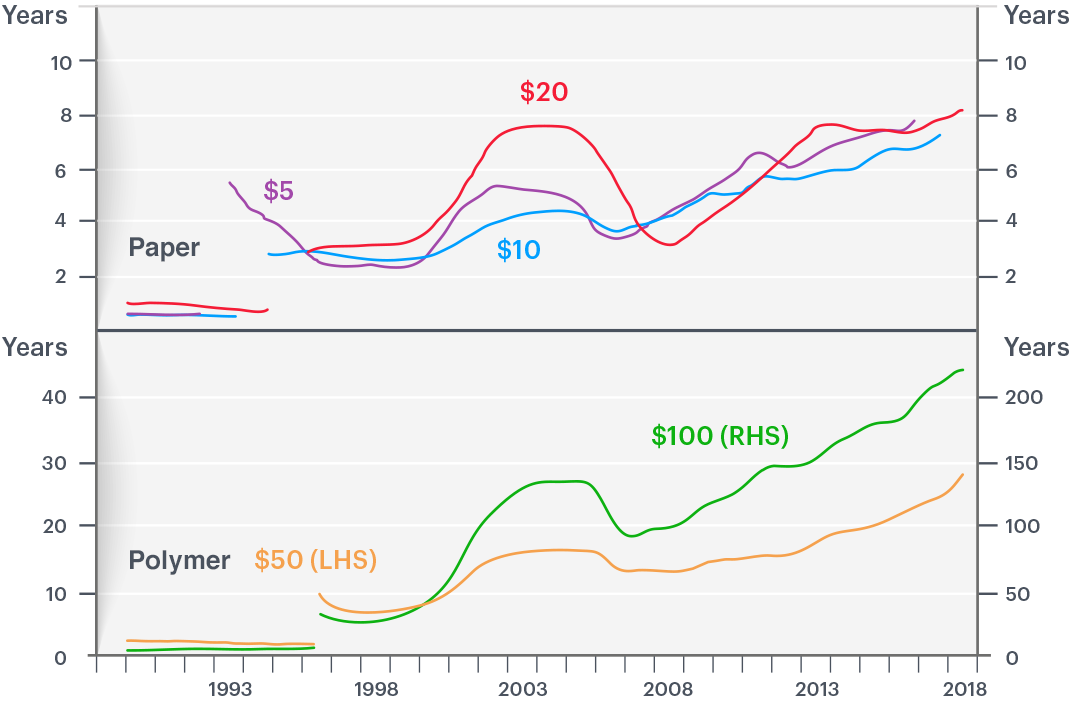 How are the savings calculated?

In Australia, security was the principal reason for switching to polymer, in direct response to counterfeiting challenges that dated back to the 1960s.

The cost savings were an additional benefit which the RBA report quantifies by calculating the ‘upgrade’ or ‘up- front’ cost of replacing all old-series banknotes, as well as the ongoing annual savings in production and other costs. To make it a fair analysis, the RBA compared the costs for both paper and polymer, using published figures from the Bank of Canada’s more recent swich to polymer in 2011-13.

The findings supported the experience of Australia and many other countries. Fundamentally, the reduced costs that derive from the use of polymer banknotes are driven by the much greater durability of polymer compared to paper.

In simple terms, a long life means less need to replace old banknotes with new ones. This means production costs are cut, along with other costs such as distribution and destruction.

The principal drivers behind the increased savings are the lower denominations ($5, $10 and $20), which had a considerably shorter life in paper form.

For these banknotes, upgrade costs are estimated at between $30 and $50 million. The break-even point (the point at which total cost and total revenue are equal) was achieved within four years on polymer.

From the issuance of the first polymer series of banknotes until the recent introduction of the Next Generation Banknote Program, the RBA estimates savings totalling just under $1 billion in inflation-adjusted terms.

Three decades on from Bob Hawke’s rallying cry, the bank’s backing of banknote innovation has clearly paid dividends. Like other central banks around the world that have since moved to polymer, it has experienced a banknote that is cleaner, greener, more secure and more durable.

Summarising their findings, the authors of the RBA Cost-benefit Analysis report said: “Australia’s move to using polymer banknotes around 25 years ago has been very successful: the banknotes have proved difficult to counterfeit, which was the original aim; and they have been very durable, which has saved the bank and, by implication, Australian taxpayers, roughly $1 billion over that period.”

The world’s central banks are under pressure to deliver and manage currencies that are both affordable and secure, winning the confidence of the public in their roles as both taxpayers and cash users.

The experience of central banks as diverse as the RBA, the Bank of Canada, Banco Central de Costa Rica, and the Reserve Bank of Vanuatu in working with CCL Secure to make the transition to polymer give a clear direction of travel for central banks to follow.